Today we have a guest post from Ben Scheele who has recently submitted his PhD thesis investigating the impacts of chytrid fungus on amphibian populations. Much of Ben’s thesis investigated the dynamics of chytrid infection in Australian amphibians, but an important component of his research was conducted in Transylvania, Romania. Today he shares the results of his Romanian research.

With ever increasing global trade, the unintentional spread of pathogens into naïve host populations is a major threat to biodiversity. This threat is perhaps best exemplified by disease-driven global amphibian declines. First recognised in the late 1990s, the amphibian disease chytridiomycosis, caused by infection with chytrid fungus, has been implicated in the severe decline or extinction of hundreds of amphibian species.

Much research on chytrid has focused on regions where the pathogen has driven rapid amphibian declines, such as Australia and Central America. However, over the last few years the known distribution of the pathogen has expanded rapidly, with the fungus now detected in over 50 countries. Eastern Europe is a region where chytrid has recently been reported, however, little is currently known about the pathogen’s distribution or impact on amphibians in the region.

In 2012, two of our collaborators detected chytrid in Romania. Given the capacity for the pathogen to drive mass amphibian declines, we were interested in evaluating the threat posed by chytrid. We focused on infection in the yellow-bellied toad, a species that is commonly infected in Western Europe and is widespread throughout our study landscape. We collected skin swabs from 550 toads (check out a short clip of the field work here). Because environmental conditions can mediate the distribution and prevalence of chytrid infection, we collected our samples from 60 independent ponds, covering a diverse range of habitats. We then examined whether the environmental context of each pond influenced whether chytrid was present or absent.

Overall, we found that chytrid infection was low in yellow-bellied toads (5%) – good news indeed! However, the pathogen was widespread across the landscape, occurring in a quarter of all sampled ponds (see map). We found that ponds were more likely to contain infected toads when they occurred close to perennial water sources. We suggest that this pattern reflects pathogen spill-over into ephemeral ponds due to amphibian movements from nearby, more permanent breeding habitats. Chytrid is sensitive to desiccation and is unlikely to persist in ephemeral ponds during extended dry periods, while perennial ponds can remain chytrid-positive over consecutive years, likely acting as source habitat for the pathogen. We also found that ponds in open landscapes were less likely to contain infected toads. Such ponds are probably less suitable for chytrid because they experience higher water temperatures compared to forest ponds, potentially reducing chytrid growth and survival. 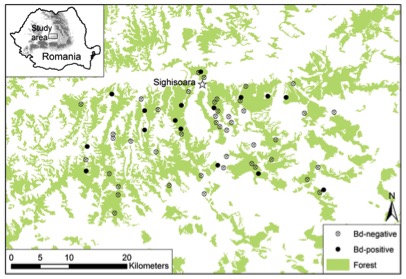 A map showing the distribution of sampled ponds and ponds where chytrid-infected yellow-bellied toads were detected.

The landscapes of Southern Transylvania are a mosaic of forest, pasture, meadow and arable land uses, with relatively few amphibian breeding areas containing permanent water. Our results indicate that this mosaic results in patchy environmental suitability for chytrid, as ephemeral ponds in open landscapes, isolated from permanent water sources are likely unfavourable for the fungus. As such, the overall risk posed by chytrid to yellow-bellied toads in the region may be limited because conditions suitable for the pathogen appear to occur in only a subset of toad habitat. However, in Southern Transylvania, ephemeral ponds in open landscapes are disappearing due to a transition from cattle and buffalo to sheep grazing and agricultural intensification. The loss of ephemeral ponds from open landscapes is likely to cause a contraction of yellow-bellied toads into forest and stream-side ponds, which appear to have higher pathogen suitability. As such, a higher proportion of the total habitat area occupied by toads may be suitable for chytrid fungus in the future. 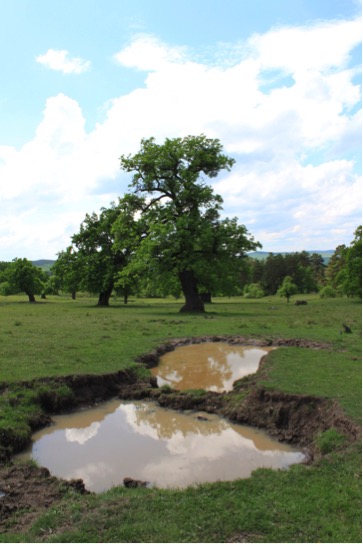